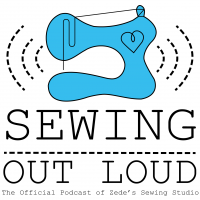 Circle Skirts are one of our favorite things!

How many circle skirts has Zede made?  Well, before you email us to dispute the super high number, keep in mind that she used to make about 40 at a time, and some of those were circle skirts with multiple layers!  So, we guess it’s in the high several hundreds.

These white circle skirts have been floating around the Columbia, Missouri Show Choir/Community Theatre scene for the past 20-ish years.  They are a versatile costume piece that could be worn over and over again (or used as a tree skirt).

What Is A Circle Skirt?

When you lay a circle skirt flat on your cutting table, it looks like a donut! Yum!  There are also 1/2 and 1/4 circle skirts (in the recording, Mallory says “3/4” circle skirt, which is technically a thing, but not quite as common)

This Circle Skirt App by By Hand London is Mallory’s favorite shortcut for circle skirt math (or maths)!

This tool lets you start out by choosing your units (metric or imperial), then the shape of skirt you want; Full, half, or quarter circle.  Then the length.  Then it does the maths!

The app shows you how to lay out your skirt and tells you how much/what width of fabric you should use. It’s awesome!  It also tells you that it adds seam allowance- which Mallory did not notice at first!