In case you haven’t heard by now, Mallory is in a production of Sweeney Todd (Fall 2018). Zede proclaims her a quintuple threat because not only does Mal sing and act but she’s baked 166 mini meat pies, altered costumes, and knitted a costume piece.

Mallory has really enjoyed performing and is liking the intimate atmosphere as this is a very small production with 12 cast members. She says this musical could easily be a cast of 30 so the ensemble has to play many different characters.

For those unfamiliar, Sweeney Todd is about a man (Todd) who is wronged by the criminal justice system in Victorian England. This is a classic revenge tale with Todd, who is a barber by trade, slitting the throats of those who visit his chair.

One of Mallory’s characters gets their throat slit and since ensemble members play multiple characters another cast member has his throat slit twice. Mallory remarks that even though the production is small the producers and cast are great.

The original costumer overextended themselves (which is a common occurrence in theatre land) and a new one was brought in. The director knowing Mallory has sewing experience asked her if she was able to help the new costumer with any alterations if the need arose.  Mallory is already doing a ton for the show but agreed to help if she was given enough notice. Mal says she had a quick flashback that prompted her to ask the director, ” are you sure you have someone?” Mallory had to be sure there was actually a new costume director and by “alterations” the director didn’t mean “you’re the costumer”.  The director assured her there was a costumer.

One of the show’s costume pieces is a dress that had been tucked up. The dress had a very full skirt with with three large pleats to make it shorter. Mallory had to let these pleats out.

She also had to hem some pants. One pair were hers; she plays a women in the first act and three different men in the second act.

On the dress she wished the bobbin thread had been a different color for better visualization and the stitches longer for easier removal. Zede says if you tuck or pleat a dress hem like that a 4mm stitch length is the minimum you want to use. It’s a hem, it won’t get a lot of stress like a crotch seam.

Reflecting on their previous costume podcasts Mallory notes it would have been nice if she could have immediately seen the bobbin thread and had a longer stitch length to undo. So she kept that in mind when she hemmed the pants.

She used contracting bobbin thread when hemming the pants. Since the pants were black and brown she used a dark brown and charcoal top thread and a gold bobbin thread. She made a 2 inch hem for a cast member’s pants and her hem was 4 inches. Her pants already had a hem so she left that there and just folded up the pants inches. She didn’t double fold the hem because it was too thick, she opted for the one fold longer hem because it gave a nicer look to the pants.

She left all the length on the pants – no cutting done. Zede highly recommends never cutting length off of hems.

Mallory did not press in her blind hem to sew it. Your machine manual will tell you to press before sewing but don’t do it! Zede says you can be ever so slightly off while sewing and the hem may not match the hang of the pants. Then when you undo the stitching you may not be able to press out the crease. Zede cautions not to trust that spraying with vinegar or water and pressing again will get that crease out, it does not always work.

Speaking of creases… Mal had to really spray and wet down the dress and give it a good press to get the creases out left by the tucks. And after she hemmed the pants she put the iron on the polyester setting and lightly seemed the pants hems. She did not press or iron the hem with any force, just a quick steam to give the pants a nice crisp hem. She really wanted to make sure the pants hems were easily alterable, she knows not everyone will need a 4″ hem.

Shows can be hard on costumes

In this show when Sweeney cuts peoples throats they fall off the barber chair to the floor and Sweeney grabs their legs and keeps them kind of pour into a trap door. There is a lot of stage movement and cast member interactions and some crawling to get to the right spots. The beggar woman gets pushed down a bunch and Mallory says her skirt hem got all torn up.

The Toby character actually ripped the back seam of his pants during a show. He does a lot of dancing on stage and in a pair of woven pants and Mal had to stitch them up by hand one night.

Mallory says her real MVP move was helping Johanna during a performance. Johanna wears this white dress with a zipper up the back and the zipper pull was not working properly. The costumer fixed it but then the pull came off again during a show. Mal is backstage and everyone looks to her. The initial thought was to pin the dress together but then everyone asked if Mal could just sew her in the dress. There was some fancy stage shuffling and Mal holds onto the needle and thread as she sings across stage to get to Jahanna. By the haze of blue light ropes Mallory starts sewing the dress together where the zip failed. Johanna needs to get back on stage so Mal sticks the needle in back of her collar and sends her to the stage. She comes back and Mal finishes sewing her in the dress.

At intermission Mal undoes her hand stitching and puts the zipper pull back on and they proceed with caution until show end.

THIS BROADCAST IS BROUGHT TO YOU BY:

“THE FEEL FREE TO COMPLIMENT ME” LAPEL PIN 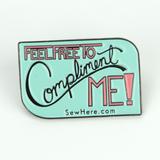 This enamel lapel pin lets all your sewing friends know that you’re ready for those compliments!!!

Mallory and another cast member are mustache buddies for the show. One evening he applies his mustache with spirit gum which is a skin adhesive used to glue on facial hair and the like. His first act character wears the mustache but he removes it to play his second character in the second act. So one evening during the show he comes to Mal saying he thinks he’s overdone it. In removing his fake mustache he has also removed some facial skin and now has a red abrasion.

Thankfully he is done wearing the facial hair for that nights performance. So Mal puts some green concealer over the red skin to neutralize the color and then skin tone stage makeup over that. The next day presents another challenge as he needs to wear the mustache again but still has a pretty good abrasion. Trying to be diplomatic and not too bossy Mallory says she has an idea if he is ok with letting her try something. She fashions a bandage with mic tape. Mic tape is a plastic tape with air holes all along very similar to medical tape. She cuts a long thin piece of it and then a smaller thin piece. She lays the smaller piece sticky side to sticky side on the middle of the longer piece creating this band-aid. So he is able to cover the abrasion and have something for the spirit gum to adhere to other than his skin. She also applies makeup over the tape for a completely concealed abrasion.

Mallory credits learning from Zede (who is a registered nurse) for providing her with the tools and quick thinking to solve these types of problems.

So on top of all the stuff Mallory is already doing she is also replacing Johanna’s zipper in the white dress and Mrs.Lovett’s skirt waist keeps growing as its worn and needs stabilized. Mallory has thought about replacing the waistband with something more stable or reinforcing it but Zede has suggested making a channel inside the waistband and running elastic, drawstring, or elastic drawstring through it. Zede highly suggests Mal reinforce the waistband first and then decide how she will put elastic or how to make the waist alterable.

There was a piece of leopard print fold over elastic sewn into a cast members shirt. They speculate it was for holding a prop in place but they really don’t know. It was cut out but the cast still chuckles about how random it was to find.

The Beadle character has a really cool vest that is orange, pink, and purple plaid. It’s had these patchwork panels added to the back to make it larger and these panels have been let out and taken in numerous times. Mallory had to let them out for this performance and the costumer said not to worry about how it looked because the Beadle is always wearing a coat.

Zede commented how she would make vest fronts and no backs. Instead she would use elastic and make a strapping system on the back. She notes you can’t always do this but garments like this can fit alot of people.

Mallory signs off the podcast with a little taste of the show by singing a bit of “God that’s Good”.

Keep in touch with us at: