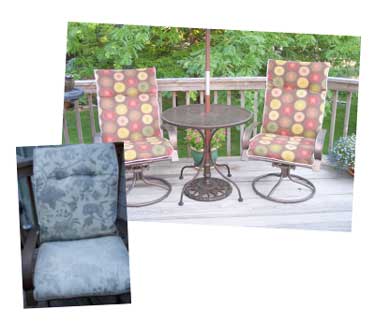 Have you ever looked at your old patio chair cushions and decided that they just had to go?  I did that recently.  Basically, my cushions were still great “inside”, but I had left them outside over the winter and they really looked bad!

I tried power washing them to clean them, but they were really faded and I just decided I either had to purchase or make new cushions.

I shopped for new cushions but I didn’t find what I wanted.  Since I was replacing cushions, I wanted them to match or coordinate with the downstairs patio furniture.  We have an upper deck and a lower patio area.  We had a pond built a couple of years ago, so we use both areas a lot during the summer and fall time of the year.   The furniture downstairs is brown outdoor wicker with rust color cushions.

Zede had asked Linda “B” and I to attend a workshop in Fenton, Missouri at The Tacony Corporation to learn to use the new Jewell long arm quilting machine in April.  Naturally we had to go fabric shopping!

I found this great fabric for the new cushions.  Linda thought it would look good with my other patio furniture also. Its outdoor canvas which means it is heavier and perfect for the outdoor cushions.

I took one of the old cushions apart to use as a pattern for the new cushions.  It had piping or bias cording around the edge that I also removed.  I cut out the pieces for two cushions from the new fabric and I allowed an extra two inches at the back or bottom of each cushion to turn under and hand sew together.  I knew I could not get the two cushion pieces on the sewing machine to finish sewing them together!

I asked Zede for advice on the type of thread and the size needle to use on the outdoor canvas.  She suggested Mettler metrosene plus thread and using a size 80 or 90 jeans needle.

According to “Needle ABC “by Schmetz,“ a jeans needle has a medium ball point that penetrates thick and solid fabrics easier without damaging the material.  The reinforced blade causes less deflection of the needle and reduces the risk of breakage or skipped stitches”. I selected the Bernina size 80 jeans needles for my project.

Zede also suggested I use a longer stitch on the machine to sew the cushions.  I changed the length of the stitch from a 2.5mm to a 4.0mm on the machine. In sewing terms, a 2.5mm means about 10-12 stitches will be in each inch of your sewing.   I might add that if you are making several cushions, it is recommended that you change needles every 6 hours of sewing.   (My chair cushions did not take near that long to sew together!)  Zede also suggested I use the piping I took off the old cushions as trim for the new ones.  The inside of the cushions was in great shape so I didn’t have to worry about new stuffing either!

The major problem in remaking the cushions was attaching those two cushion parts back together.  I did this using a backstitch.  I started in the middle of the cushion and stitched each cushion to the edge then back to the middle twice.  My original cushions had Velcro attached to the top back on each side to secure the cushion to the chair.  I did not reattach the Velcro pieces because I now take them in after every use!  (I don’t want to replace them again anytime soon!)

I have to say the new cushions look great in the chairs on my deck!

I saved money by redoing the cushions, they’re comfortable, and they match my other outdoor furniture cushions. 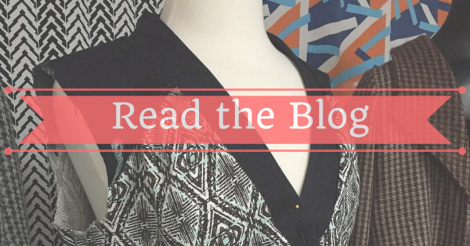